More Than Walking - The Film

This award-winning 25-minute documentary tells the stories of Director Jonathan Sigworth and four of his Indian quadriplegic friends as they discover the challenges and opportunities of living with a spinal cord injury.
​

​The More Than Walking Story 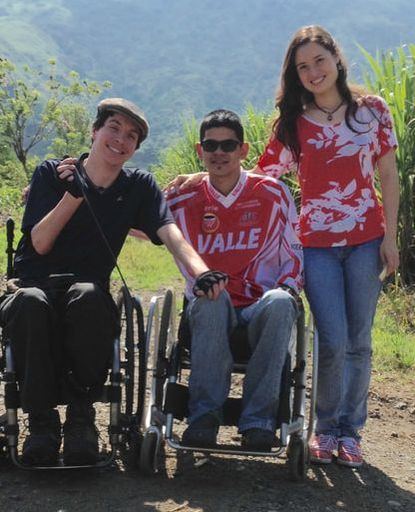 Jonathan Sigworth (left) grew up in Connecticut, USA and became a documentary filmmaker and disability advocate in India after a 2006 bicycle accident there left him paralyzed below his arms and in his hands when he was 19. He subsequently returned to India, while completing his English degree at Wesleyan and then at Dartmouth University, to start India’s first wheelchair rugby team and direct a short documentary “More Than Walking” (2009) – having witnessed the lack of opportunities that new spinal cord injury patients had to learn about pursuing independence again.

​Jessica Bello Capote (right) grew up in Cali, Colombia and became a physical therapist because she enjoyed helping people live with chronic conditions that required new adaptive skills and tools. Valedictorian of her class at Universidad del Valle, she worked in Cali from 2013 to 2015, practicing neurological, aquatic, and musculoskeletal physical therapy. In November 2013, Jessica was treating a quadriplegic patient named Jaiber (center), who didn’t believe that he could get out of bed and into his wheelchair on his own after becoming paralyzed in a motor-cross accident in 2011. In an effort to convince him otherwise, Jessica searched on YouTube and found Jonathan’s documentary and bed mobility demonstration video.

​Jaiber believed that Jonathan was only acting paralyzed, so Jessica found Jonathan on Facebook and discovered that he had just moved to Delhi to start a transitional living and peer mentor program for quadriplegics with ESCIP Trust India. Soon after Jessica contacted him, Jonathan traveled to Colombia to visit her and mentor Jaiber in person.  Not only did Jaiber begin pursuing independence, paragliding and wheelchair motocross, but Jessica and Jonathan married in 2016 and co-founded More Than Walking Incorporated on August 28, 2017 to improve global access to the knowledge and community that makes life with paralysis possible.